Being in the flow and getting in great shape by hiking for your turns. pic Ryan Koupal

Splitboarding is fun! The feeling of having worked for the descent, getting the perfect feel for the changing snow during the ascent and having already mindsurfed different sections of the potential run, brings a very own, extra quality to the already fantastic snowboarding experience, In addition, you get in incredible shape.

With my friend Ptor Spricenieks, Pogo has developed the freeride ski Wolverine over the last 2 years. Ptor is a ski legend in Canada, who has made incredible first runs. Check the documentary about him: Dreamline and the article about his views on skiing and live in the Backcountry Magazine. I've known him for ages from my favorite ski resort, La Grave, where he regularly conjures up the coolest lines in the snow that you can admire on the one-hour launch in the Teleferique. 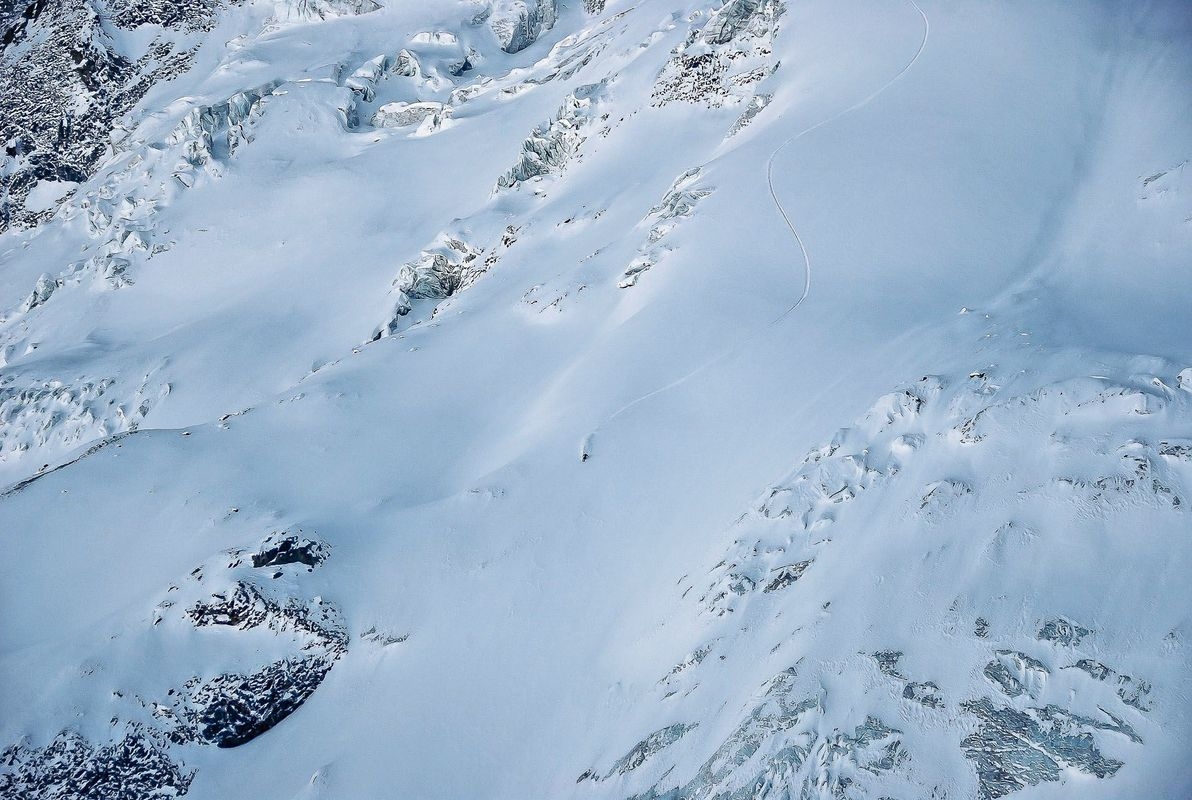 Ptor drawing a line on one of La Graves beautiful glaciers

He was also the one who showed me pictures of an extraordinary mountain, which immediately caught my attention. He is the headguide in Kyrgyzstan for 40 Tribes offering exceptional ski and snowboard tours worldwide.
40 Tribes was founded by Ryan Koupal, who is also co-owner of the splitboard binding company Phantom. The name is an allusion to the 40 autonomous tribes that once populated the Kyrgyz region. The project is also intended to provide locals with sources of revenue in winter, tourism otherwise only takes place in the warmer months.

In the spring of 2017, Ryan, who was now on a split version of the Pogo Wingergun 173, had invited us to spend a week in his yurts. We had quickly put together a small group of volunteers who wanted to get involved in the adventure. Ben, Tim and Sophia were with the party. The troupe was supplemented by 3 skiers from La Grave, Kurt, Peter and Joost, who had launched the "Let's Keep It Wild" initiative, and was represented in all major print and online media worldwide.

Ben, Tim, and Sophia had flown ahead as they had another week to explore more of the wild land of Kyrgyzstan.

My flight went via Istanbul, where I met Kurt, Joost and Peter, to Bishkek, the Kyrgyz capital. In Istanbul, we sat comfortably in the plane and had already the safety talk behind us when suddenly the message "get out again, in Bishkek is snowstorm" came. With a heavy heart we made our way out, as we were afraid to lose a valuable day of our touring week. The "annoying" blizzard, however, was responsible for the incredible, untracked powder that we would find. Fortunately, our replacement flight was already at 10:00 the next morning. In Bishkek, where the high mountains of the Tien-Shan meet with the Kazakh steppe, our driver received us directly. 6 hours drive waiting for us, interrupted by rest breaks, where we made first culinary experiences with the exotic Kyrgyz cuisine. The track was once an important part of the Silk Road, Marco Polo and Genghis Khan were already here. Stayed in Karakol, then we went on with an old Russian military vehicle, because the track was getting rougher. The driver was nicknamed Schuhmacher. 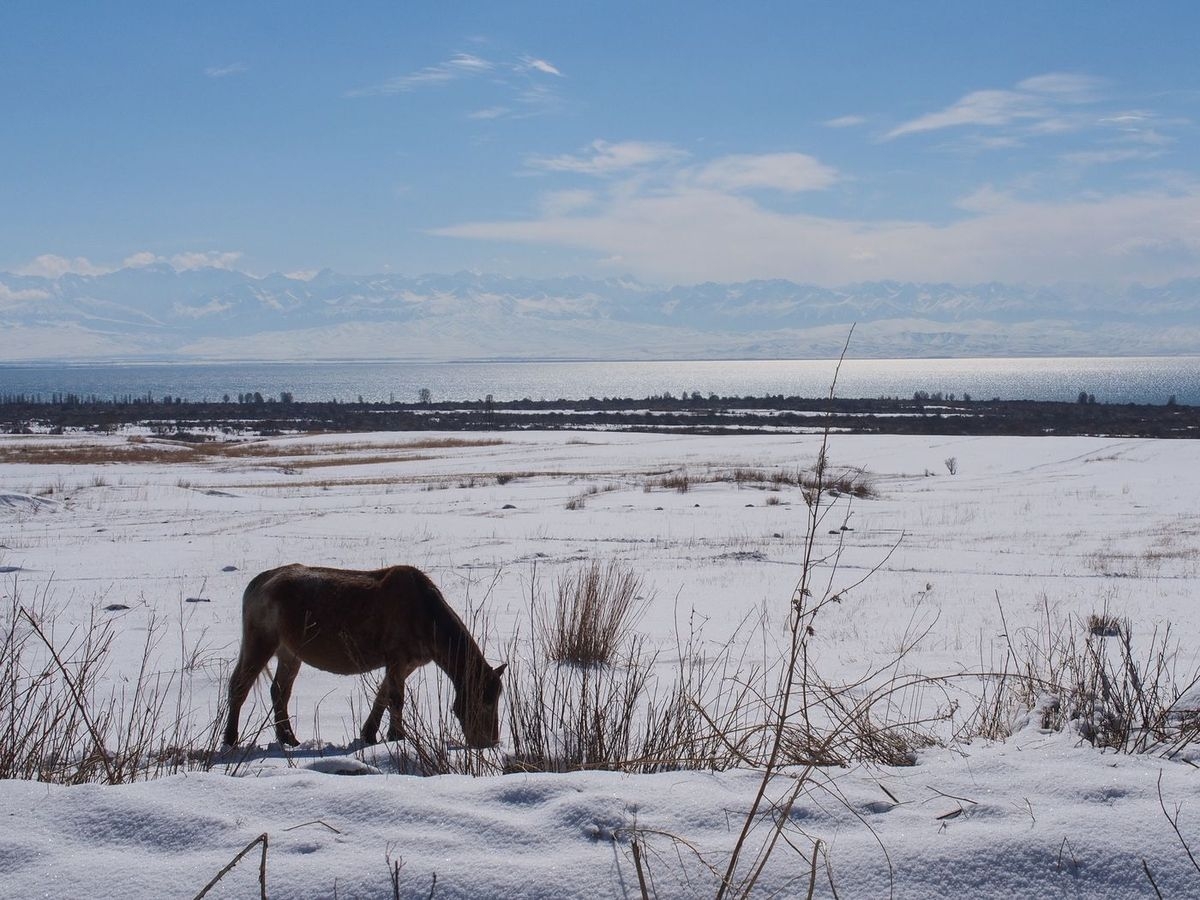 Lake Issyk-Kul with our mountains in the background. pic Martin Sammet

In a small village at the foot of the mountains that hosted the yurts, we could leave the things we would not need on the mountain in Nurbek's house. Nurbek was our cook and would provide us with exquisite Kyrgyz specialties for the upcoming week. He also brought a part of the baggage, such as sleeping bags and the powder surfers on his horses, to the yurts at 2600 m altitude. The Powdersurfers were supposed to provide after-work fun, but only Ben had the energy to enjoy it after a hard day's touring. The kitchen helper Akim, however, had a lot of fun with them and made several runs down to the village. 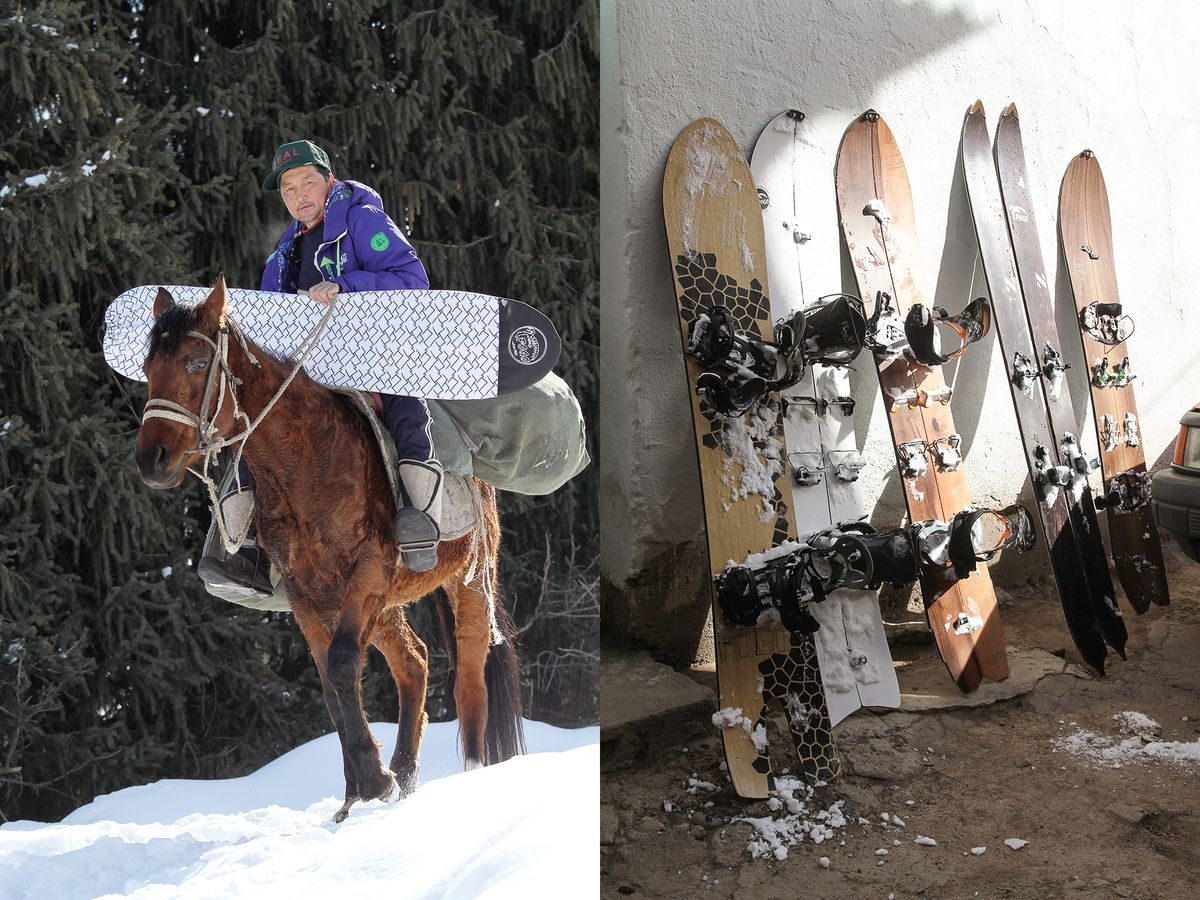 With our tour luggage we started the 3-hour ascent in best conditions. For 2 days it had dumped and we enjoyed the fantastic winter landscape.

Arriving at the camp, Ryan and Ptor greeted us, thanks to the conditions in a splendid mood, and showed us the yurts.

As a tent senior, I got the best sleeping place, right behind the stove. However, I later realized that I had to stumble over most people peeing at night. Nurbek and Akim served tea, and after a short break we went straight for the first small tour. The compulsory avalanche safety introduction we decided to perform the next morning, since we were all experienced freeriders. Ptor as headguide set the track. He tried to hit the old ascent again. If that did not succeed, it got really exhausting, because the snow felt bottomless, and you sank despite the splitboards or Fatskis partially to the hips in the snow. 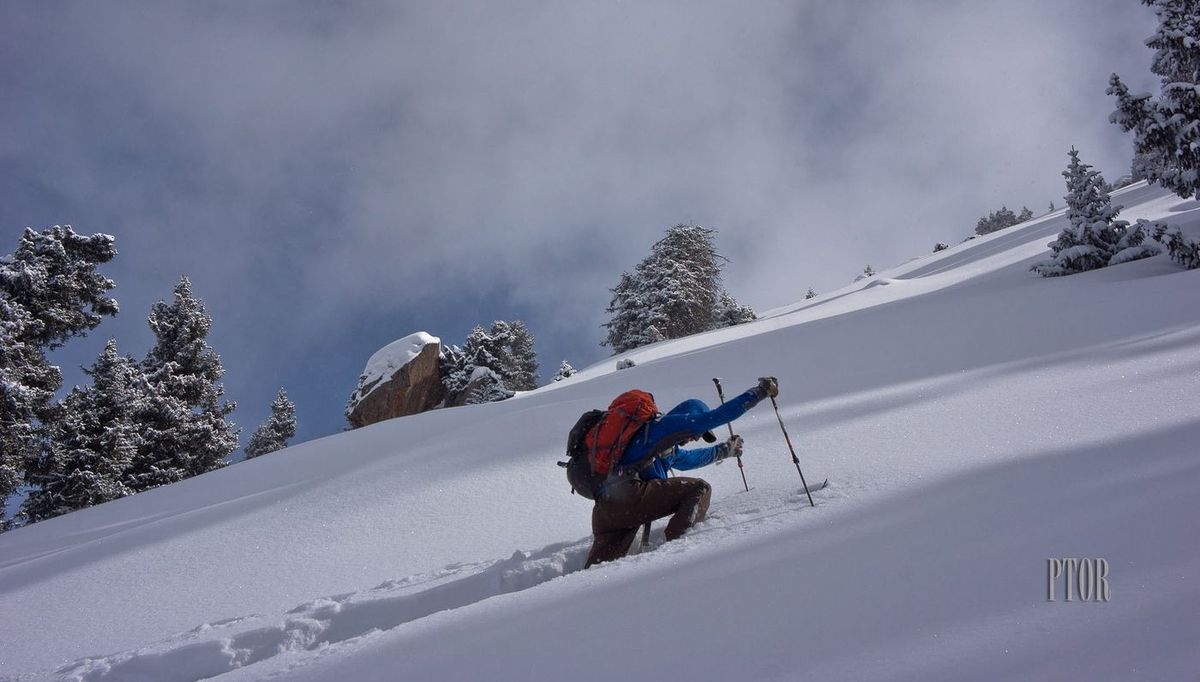 Setting the track in bottomless snow can be very tiring. pic Ptor Spricenieks

Due to the immediate proximity to the lake Issyk-Kul, after the Tititacasee the second largest mountain lake on earth, there was plenty of precipitation, but still good weather periods. For the rest of our week we should hardly see a cloud in the sky anymore. What a feeling to put the first turns in this bottomless, crystalline deep snow after the ascent. Luckily, my Wingergun offered enough lift and made the descent pure enjoyment. 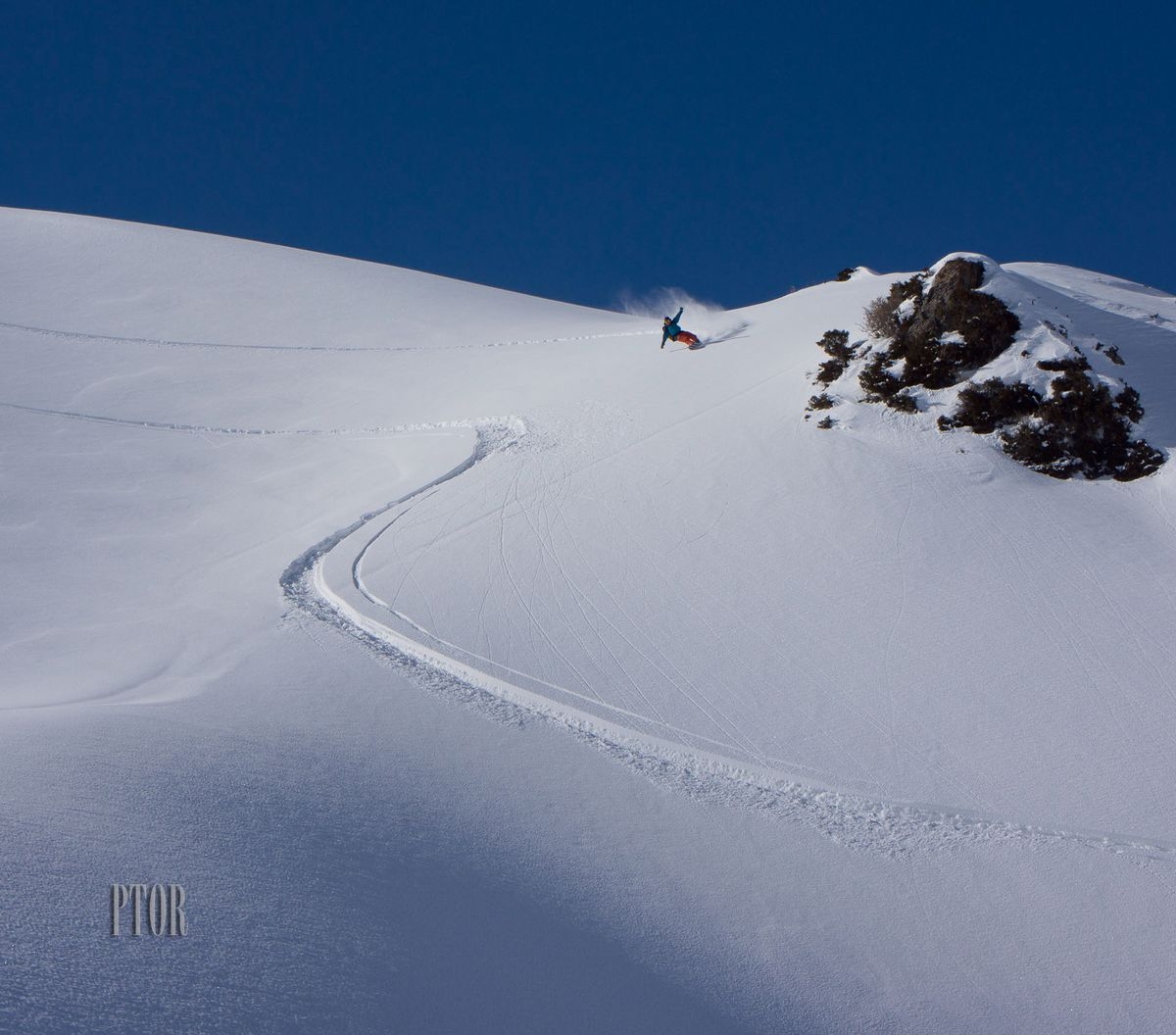 I start to get used to that special snow. pic Ptor Spricenieks

Back at the camp there was a Baltika for everyone, the local beer, and we enjoyed the mystical evening mood with a fabulous view of the Issyk-Kul and the Kyrgyz 5000s in the distance. 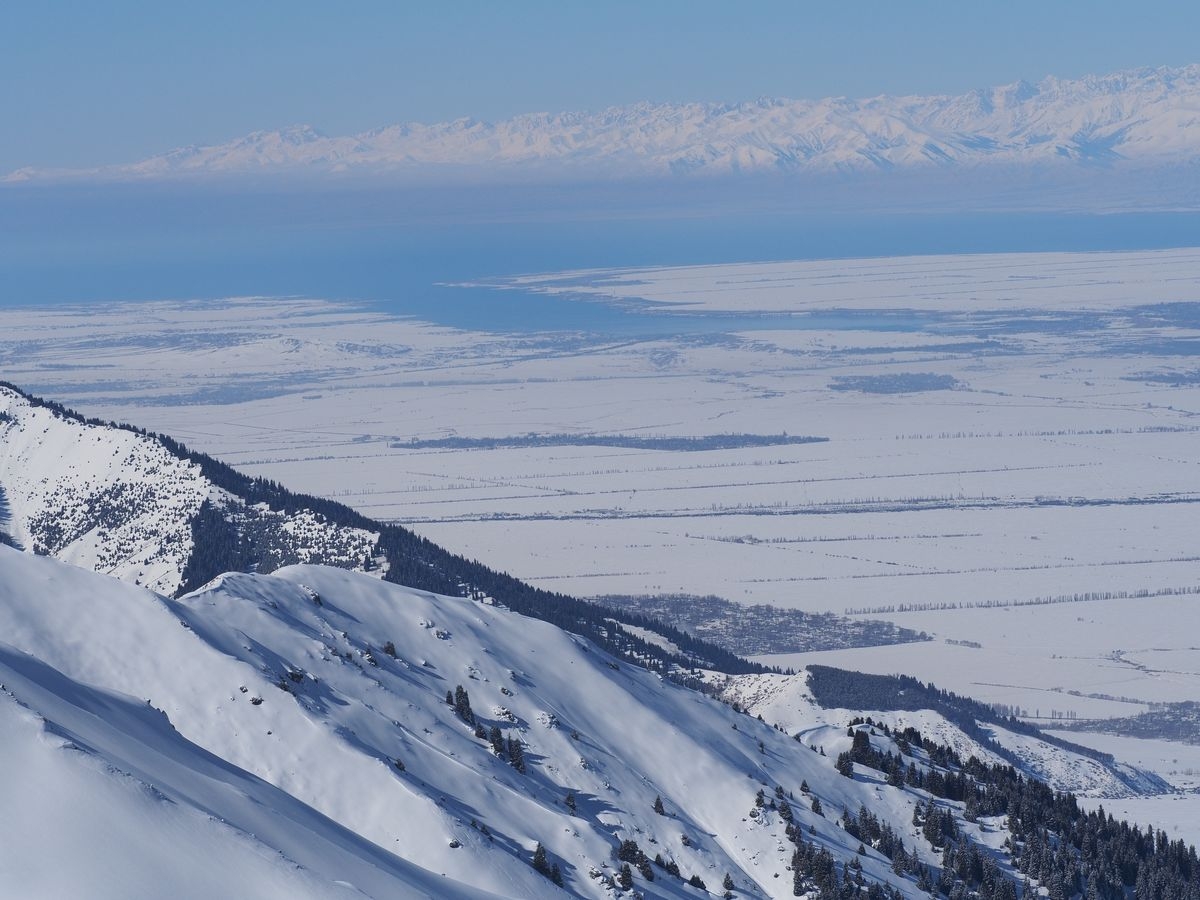 Enjoying a Baltika and the view. pic Martin Sammet

Before dinner was Yahtzeetime, during which we swallowed one or the other Baltika. We were able to watch as Nurbek and Akim added the finest local ingredients in a huge saucepan, the Kazan. This was directly on the open fire of the traditional stove, which was both heating and cooking. An incredibly delicious, exotic scent widened and broadened in the yurt. Our mouths started to water. Finally we went to the food and apart from the crackle of the fire, as well as an occasional slurping or smacking in the yurt, but also far and wide, nothing more to hear. This way Nurbek and Akim prepared a different  traditional Kyrgyz dish every night during the week. Then we rested our weary limbs as Akim fueled the oven in our yurt again. I was lulled to sleep by the sound of cracking fire, dreaming of snow leopards and giant mountains.

The next morning, after breakfast, Ptor gave a little refresher with practical training in avalanche awareness. I realized that I had not practiced with my device for far too long. It will be different next year, I promise! 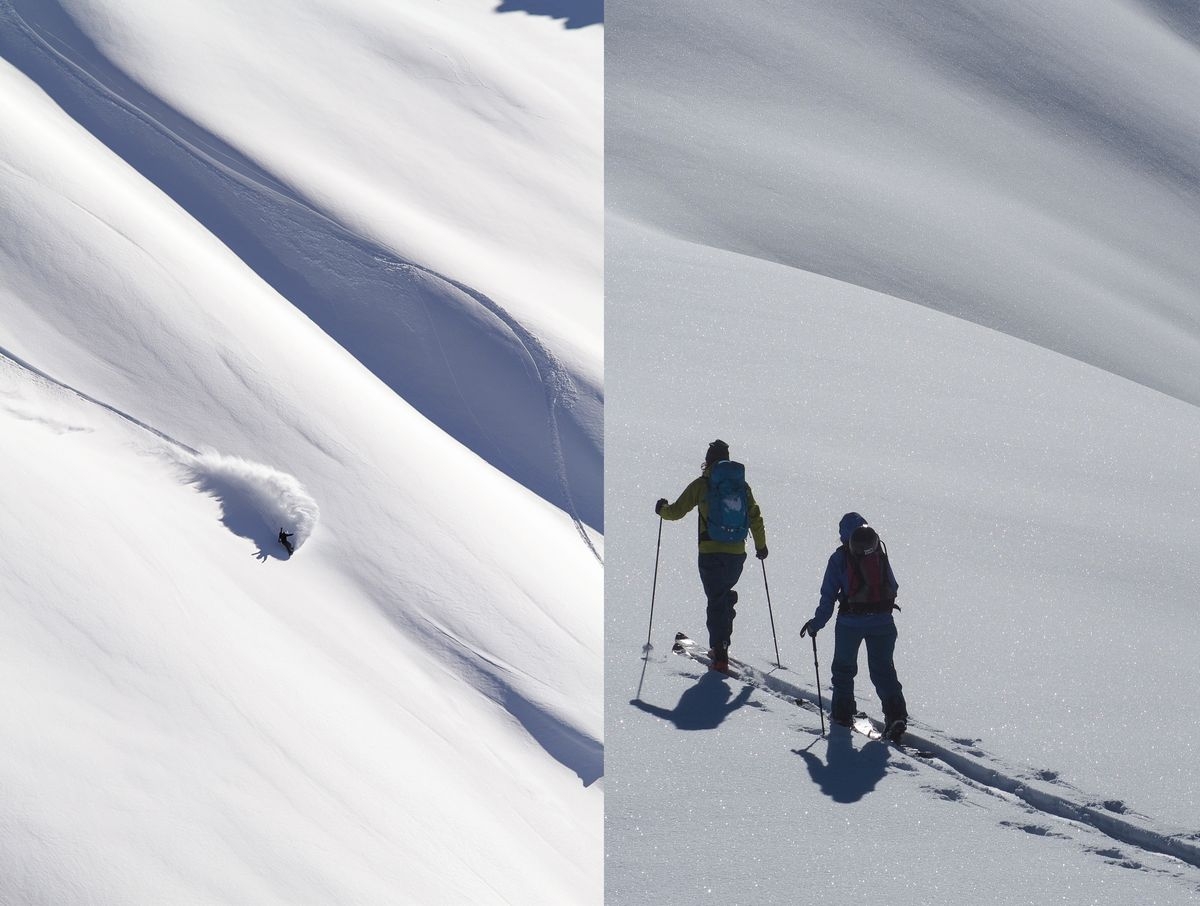 Then we went on with chilled 800 meters altitude. The possibilities offered seemed to be endless, everything untracked and only for us. We started to feel the snow better and better and the grin on our faces widened from downhill to downhill and the hoots got louder. At the end of the day we went a bit higher to the Gamburger stand. Since I barely had time to get in shape before the trip, I had to torment myself right now to make it to the top. The temptation to simply break off and watch the others on the descent was quite enormous. How happy I was when I stood on top and could just pick one of the many cool lines. The descent was certainly one of the highlights of the entire trip. 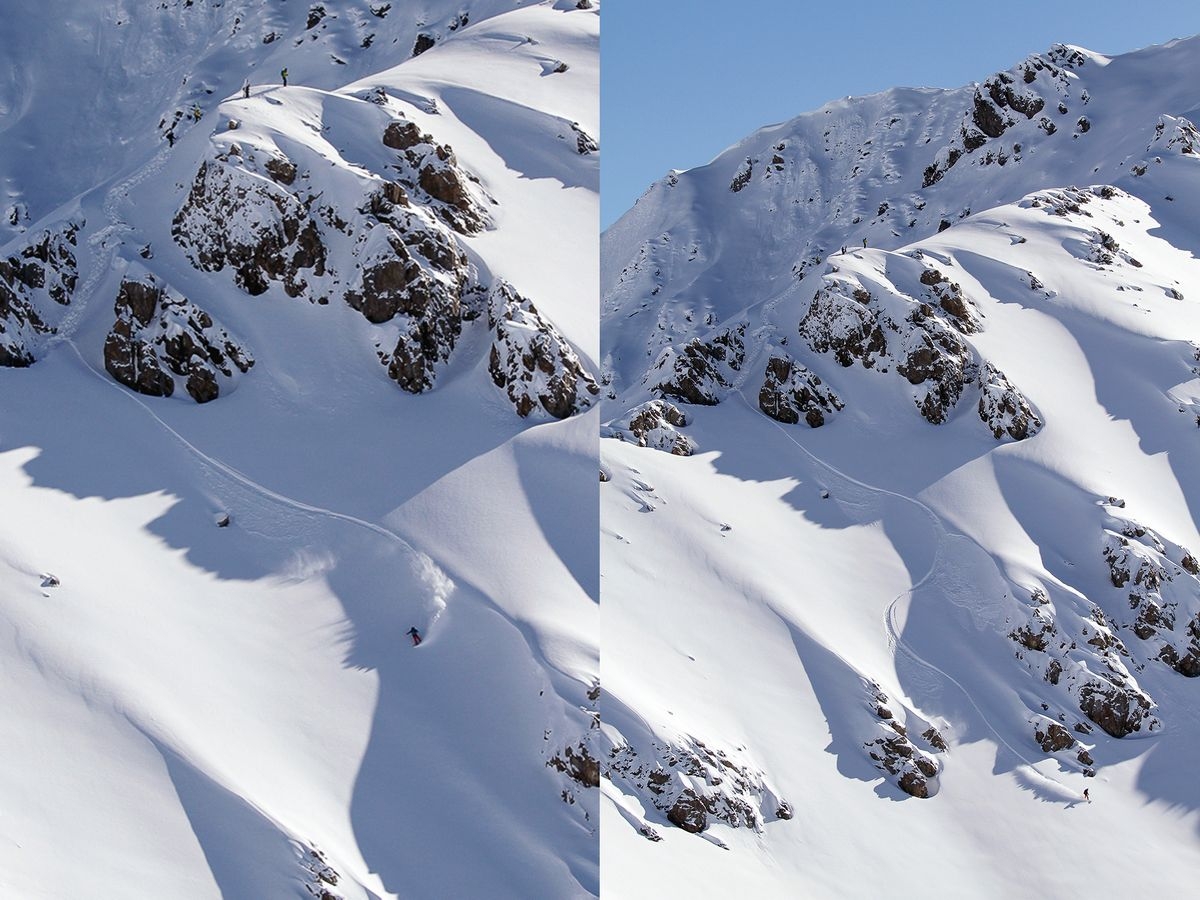 I love to put the first line in the face. pic Ryan Koupal

When we raised our glasses in the evening, back at the yurts, I did not think that our stoke-level could rise more. The evening followed the same pattern as the previous one. Crazy, how quickly you get used to the circumstances and then perceive them as almost normal.The days passed, and we enjoyed them, each run, every session of Yahtzee, every meal. Thanks Ryan, Ptor, Farmer Moen, Nurbek, Akim and all those who are somehow involved in making this unique adventure possible. As we boarded the bus that brought us back to Bishkek, clouds began to rise in the distance. These should bring the snowfall that was supposed to reset the whole area, to the joy of the group that came after us. 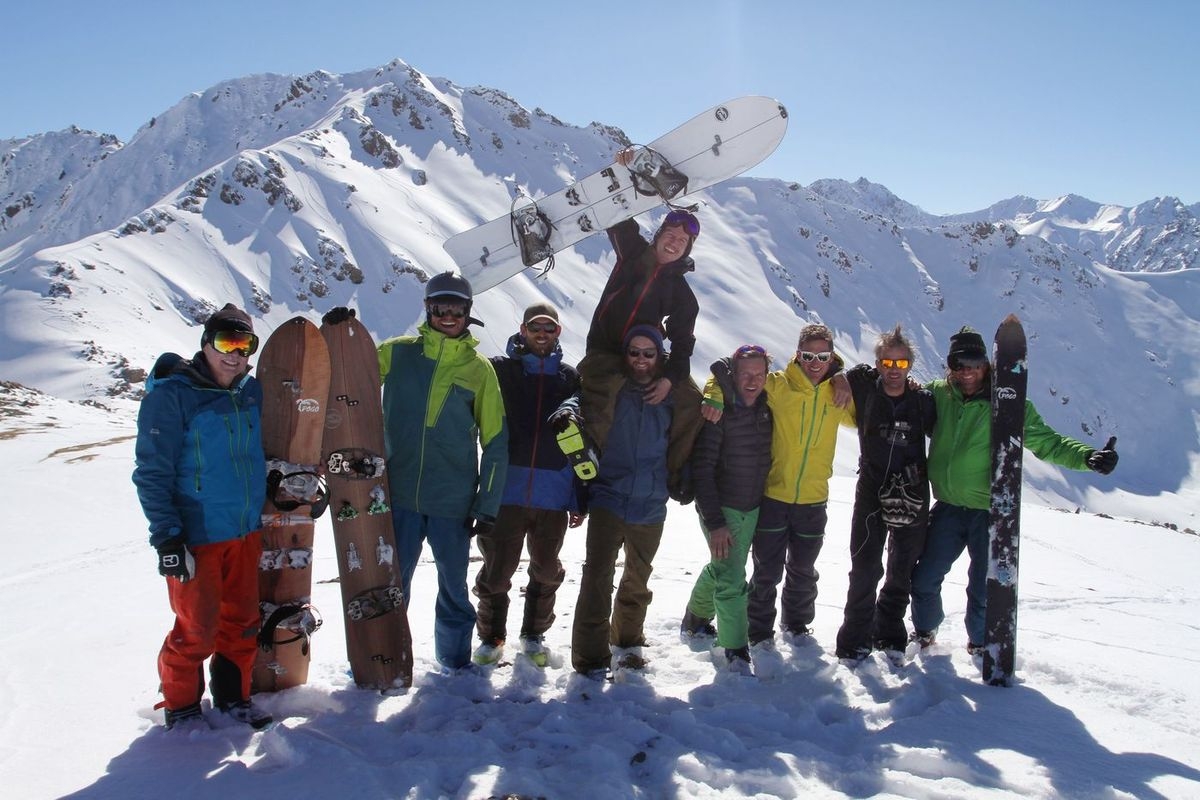 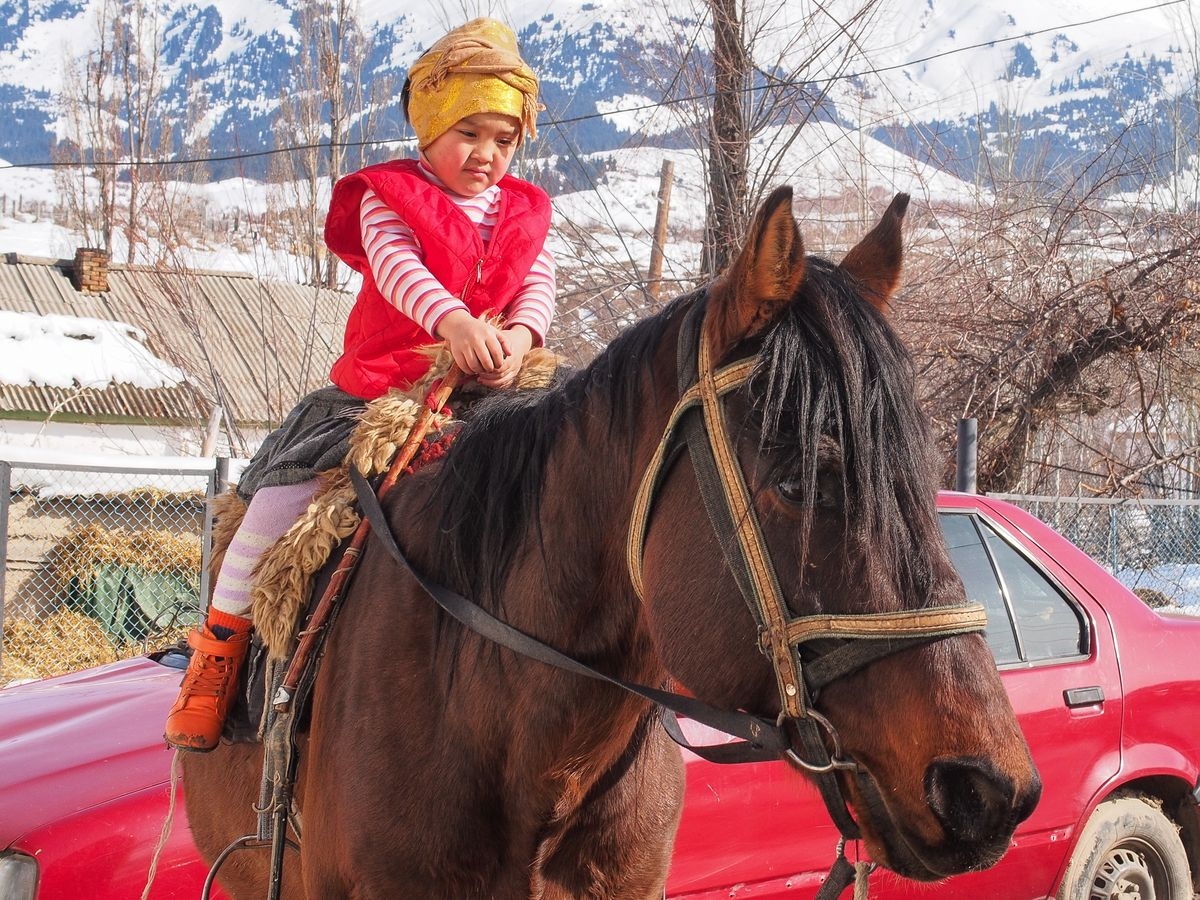 In a horse culture, kids learn to ride like walking. Maybe some day these kids will be riding Snowboards?
pic Martin Sammet